Through decades of experience, Adrian has gained extensive knowledge in all aspects of elite athletic performance including training and recovery loads, injury prevention and rehabilitation,  training for elite performance, musculo-skeletal imbalances and much more. Adrian has worked with World Champions, Olympians, National Champions and many other elite athletes. When working with these athletes Adrian would custom develop programs for maximizing performance and preventing injury, as he believes that you cannot improve at your sport or perform at your maximum level while injured.  This has lead to Adrian working with over 100 international level athletes across many different sports including football, rugby league, sailing, swimming, tennis, equestrian, track and field, and includes people and athletes with disabilities.  These years of experience and his hands-on approach to developing training programs provided Adrian with the expertise to design and create a software program to manage all areas of athletic preparation.

In Australia in 2005, the national level rugby league team Newcastle Knights had a terrible start to the season and were losing every game and amassing a huge injury toll. As the season progressed it only got worse as they lay last on the table and with 26 of their 54 man squad with some kind of injury. Adrian was engaged to help get the players rehabilitated and the team back on track. As Adrian began to return players to play the Knights began winning and went on to win 8 from their last 11 games. The players began calling Adrian the X-Factor because they said he was the only thing that had changed in the club and the club went from losing to winning. Over the following two seasons Adrian reduced the games missed with injury from 246 to 54 with only 3 non-contact injuries for one season and only 1 game missed with groin injuries in 3 seasons. This is still the best injury record in the history of the club.

The players and staff shortened the name from X-factor to factor and with such fond memories Adrian used the name for the software.

In 2016 it happened all over again as Adrian was approached by a professional rugby league team in England. An iconic rugby league team the Bradford Bulls were languishing in 6th position on the table and again had a huge injury toll. When Adrian arrived they had 10 players out injured and 18 of the 30 man squad had pain on the adductor squeeze test. Adrian worked hands on for 3 weeks reducing the players with groin pain from 18 to 1. He implemented rehabilitation programs for the injured players, returning all but 2 players to field training in those 3 weeks and while working hands on for those 3 weeks not one single player missed a game with injury. The team went on to play in the championship final and won their first piece of silverware in 10 years and they affectionately named him The Wizard.

Adrian is regularly approached by sports clubs and athletes from all over the world for advice but his passion truly lays in working directly with athletes and in more recent years the potential in developing athletes from junior ages. This passion is why he has created factor, the world’s best athletic preparation program, so athletes can experience the ultimate in physical preparation, injury prevention and overall improved performance.

Adrian Brough holds Australia’s highest qualification in Strength and Conditioning (Level 3) along with a Graduate Diploma in Sports Nutrition and more then 15 years massage experience.  Adrian started with physical preparation in 1994 and successfully owned and operated his own fitness business for over 13 years and created a 1200 square metre rehabilitation medical centre. He launched ﻿﻿fac﻿﻿t﻿or﻿﻿ in 2015.

Shane Nicholls is an impressive young Strength and Conditioning Coach who was hand-picked by Adrian Brough for the Factor Team after the two worked together at the Bradford Bulls. Shane has a history as an elite athlete across multiple sports and the desire for performance and to be the best in what he does certainly has not disappeared.
Graduating with Honours from his Sport and Exercise Science degree, he has already compiled an impressive array of results.

Shane has excelled at working with a wide range of populations and client goals in his years of experience thus far. However, he always felt that his calling was to be working with elite athletes. This has seen him work with elite athletes among many codes and included time as Strength and Conditioning coach and Rehabilitation at English Professional Rugby League teams, Wakefield Trinity and Bradford Bulls. Wakefield Trinity felt the benefits of Shane's holistic approach to performance as he was drafted in by Head Coach Brian Smith to change the culture of performance around the club which was done very successfully. Shane's time at Bradford Bulls also saw some impressive results. He was part of the incredible injury crisis turn-around with Adrian Brough and was an integral part in the club being a far more intimidating force physically.
At the same time, the Under 19's of the club were struggling towards the bottom of the table with hope of a successful season all but gone. Shane then also took on the role of Head of Strength and Conditioning for this group of talented players and completely turned them around mentally and physically. This was the catalyst for an amazing late season charge which saw them miss the top 4 only by 1 point.

Shane is also part of an elite group of coaches taking part in Keegan Smith's Real Movement Project. An initiative to revolutionise the way movement is viewed and aiming to open up a world of new physical performance potential. He loves to challenge himself both physically and mentally, which sees him still training every day and also keeping on top of the latest research findings.

Shane has been an important member of the Factorprep team since beginning and has proven himself by producing many impressive physical results as well as returning athletes from the most complex of injuries and rehabilitation programs. 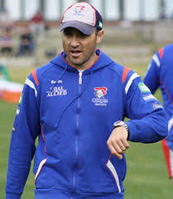 Lee Clark has been working with professional and semi professional athletes for over 20 years.  He has over 20 years of professional strength and conditioning coaching experience and has held positions of High Performance Manager in both the Australian National Rugby League with the Newcastle Knights where he took them to a premiership win and the Hyundai A league in soccer with the Newcastle Jets.  Lee has also consulted to both the Tongan and Fijian National Rugby League teams in preparation for the World Cup among numerous other individual and team sport athletes.

Lee also has a strong background in Athletics where he has remained competitive well into his senior years. He has worked with well over 100 international athletes and with many other elite level athletes during his years. He has also worked in many different elite strength & conditioning programs which makes him well qualified to have quality input into the continued refinement and development of factor software.

Lee holds Australia´s highest qualification in strength and conditioning (level 3) along with a Masters in Medical Science and Human Physiology, Level 2 in Functional Movement Screening and many other qualifications. He has managed and worked in many high performance strength and conditioning programs and provides invaluable wealth of knowledge and experience to factor software.